Skip to content
A new home, a new wine region!

Last month, M’s changing work situation saw us packing up our things*, throwing a most excellent shindig with great friends, and moving to San Francisco.

* = most of our things. International wine law is a complicated manner, and even with help from M’s employer/relocation team, figuring out what to do with our wine was one of the most headache-inducing parts of the journey.  Next time, would I just drink my cellar?  I’d like to say no, but we’ll see where life takes us! 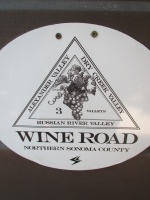 Once we got our feet under us in the City, one of our first stops was Sonoma County.  Armed with a map and recommendations, we aimed our sights at the Dry Creek Valley.

We didn’t make it up to Dry Creek until later that day; it grew too difficult to ignore all of the winery signs at the side of the road. One of the things that surprised us the most about California wine regions was simply how many wineries there were. With many more years as an established wine region, and hundreds of wineries in Sonoma alone, our journeying seems cut out for us – if I can persuade M to split our time between the vines and the mountains!

These futuristic, egg-like vessels were on the production floor at Thomas George Estates; while tasting some of their delicious Pinot Noirs, the sommelier working with us first showed us a picture  and then walked M and I over to the floor to check them out in person. He shared that the casks are primarily used to age Chardonnay and Pinot Noir wines, but that the winemaker was also planning to experiment with other varietals.

I’d never heard about wine being stored in concrete before, but heard later from a friend that Tawse in Niagara also uses this method to age their wines without imparting any distinct flavours like oak, vanilla, toast, or toffee, like oak aging would.  Concrete-aged wine doesn’t sound particularly romantic, but it’s a fascinating innovation, and definitely something I’d like to return to try!

Here’s the last sip of the last wine we tried at Thomas George Estates: a 2010 Zinfandel, which we took home with us.  I enjoyed the Pinot Noirs very much, but will have to return once I’ve found employment on this side of the 49th.  Handcrafted wines, while wonderful, reflect the care that goes into them in their pricetag.

Zinfandel isn’t nearly as widely grown in Niagara, so with the mindset of “while in Sonoma, drink as the Californians do,” I’m looking forward to learning more about this varietal. It’s one that I hadn’t put much stock in before, knowing it primarily as a sweet, berry-happy patio sipper in its White Zinfandel form.  I’d be happy to drink this Zinfandel on a patio (M and I sure eyed the garden area just outside the wine cave where we were completing our tasting with a wistful eye; unfortunately, the wine must be consumed inside designated tasting areas) but this delicious medium-bodied red would be even happier paired with a steak on a patio.

Our next stop was Hop Kiln Winery.  The historic building was constructed in 1905, and had a visually striking appeal only helped by its view of the mountains across the valley.  As we started our tasting, we learned that before Sonoma County became a wine region, this part of it was one of the largest producers of hops in the western USA.

The transition from beer-adjacent production to wine serves them well; the team at Hop Kiln serve tasty and approachable wines, and are friendly (if busy!)  The winery seems very popular with large groups thanks to both its wines and large picnic facilities, and there was a large group that looked like a family reunion spending the afternoon in the picnic area as we arrived. I know I’d have found trouble if I were a child at a winery (whether by asking tons of questions or finding my way into the library section) but it was great to see that some wineries are family-friendly.  I considered finding the library, but chose instead to sprawl with M on the winery’s large front lawn and snap an absurd number of pictures. (It’s a very cool building. Lots of neat details.)

Of the HK wines that we tried, I enjoyed the Russian River Valley Pinot Noir and their red blend the best, and as the red blend changes yearly, and has a loyal fan base, I look forward to trying another year’s vintage to see how it changes.

Our last wine stop of the day was, at the recommendation of Craig from Thomas George Estates, Bella Vineyards.  Bella is perched at the very end of West Dry Creek Road, and the journey there is gorgeous if mildly adventurous (narrow, winding roads with not really any shoulder to speak of, a decent amount of car traffic, and a more than decent amount of bicycle traffic!)

That said, is the journey worth it? Absolutely.

Bella feels carved carefully out of its surroundings; tucked into tall, winding hills covered alternately with vines or bee-magnet lavender near the entrance.

Its wine cave is built into the hill in the picture above, and on the day we visited, was candle-lit for the “Pink Out” event to celebrate the release of their 2012 rose (paired with Hog Island Oyster Co. oysters, which were amazing. I’ve never been one for oysters but the team at Hog Island might have changed my mind.)  The rose was a good match; refreshing, and with enough body to compliment but not overwhelm the oysters.

Once in the cave (french fries and 10 Acre Russian River Pinot Noir in hand), we wandered past barrels and old presses, all candle-lit, which was at once beautiful and worrying (fire hazard? anyone?) but it sounds like the winery has a good deal of experience in placing the candles so that they’re safely out of elbow reach.

Our next two tastings were Zinfandels that the sommelier nicknamed Tuesday Evening and Friday Night, and while I smiled at the nicknames initially, they fit. The first of the two, the Dry Creek Valley Zinfandel, was Tuesday – approachable, fruit-forward, with berry notes and softer tannins. I enjoyed it, but the Friday version, Block 10 (as seen below) was a little fuller-bodied and compelling.  Both were delicious introductions to the variety of Zinfandels available in California, and a great indication of the variety Bella’s winemakers (and terroir) are capable of expressing.

It was also a blast to talk icewines and late harvest wines over our last tasting, a Late Harvest Zinfandel paired with a dark chocolate peanut butter cup.  After a day of learning, it was fun to be able to bring something new to the table, and perhaps inspire someone to check out a new wine region.