Because he knows me well, part of M’s Christmas gift to me was a completists’ tour of Prince Edward County, a developing wine region in Southern Ontario. Our knowledge was limited to the Wine Country Ontario map, which offers a great highlight of nine of the area’s thirty-odd wineries (hence why we thought we could tackle this region in a weekend!) 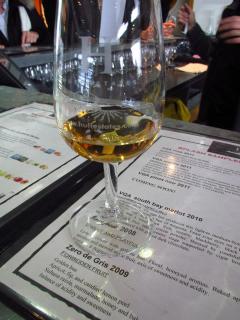 Scoring a shoulder-season deal to stay at Huff Estates garnered us a wine tour with their sommelier, Brian, whose quick wit and wide breadth of knowledge gave us a better idea of which grapes grow well in PEC, and how the various soils align to better grapes. We learned that the sweeter dessert wines grow best in the South Bay area, that the process of burying the vines in dirt over the winter is referred to as ‘plutage,’ and that we should never refer to a full-bodied wine as “heavy” within Brian’s hearing! (Fortunately, this was an anecdote, not learned first-hand.)

Zero de Gris (at left) is one of the wines we tried at Huff; the pun in its name made me smile, as did the wine itself.  It’s a late harvest Frontenac Gris (something completely new for me.) It tasted of honey, and oddly enough, of lemon meringue pie, reflecting a good balance of acidity and sweetness.  This grape species is a hybrid, first observed in Minnesota as a cross between a French varietal (Landot) and the widespread North American Frost Grape, or Vitis riparia. Perhaps in part due to its hardiness, this varietal is much more visible in PEC compared to the warmer Niagara region.

Closson Chase was one of our first stops, and even in overcast light, the soft purple on the renovated barn is striking. It’s on one of the oldest homesteads in the region, and the winery’s bold Chardonnays definitely made a good impression!

Naming conventions in PEC entertain me greatly. Closson Chase’s name sounds as if it has a tale to spin, and while I’m sure it does, it’s also simply located on the corner of roads named Closson and Chase. (East and Main restaurant and 66 Gilead Distillery are more examples of this trend.)

Decisions, decisions! Closson Chase focuses on growing and producing premier Chardonnay and Pinot Noir, and the latter was good enough to pull M and I out of our (self-inflicted, post-Pinot-Affair-last-year) Pinot ennui!

Purchasing-wise, we wanted to focus on PEC-area (or VQA PEC) wines, so we brought home the Closson Chase Vineyard Chardonnay. (The winery also sources some grapes from the S. Kocsis vineyard in Niagara for some particularly lovely Chardonnays.)

M’s declaratively more of a red wine fan, so it was great to see him try some of these bolder whites during our trip, especially at Closson – and emerge on the other side of the attempt a budding enthusiast.

The non-tasting room section of Closson Chase’s barn is a seriously nifty space – a little drafty in early March, but I could see this being heaven in May, and very cool for shindigs, weddings, and other events.

I like how the stained glass’s pattern on the far wall is echoed in Closson Chase’s bottle design elsewhere around the winery. 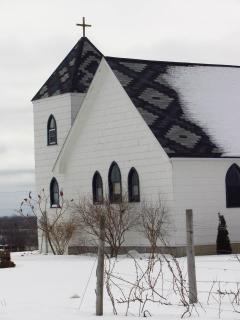 This beautiful church (at left) is on part of Closson Chase’s property; vineyards run for miles beyond it. The roof was resurfaced in the early 2000s with a design inspired by a church in Burgundy. Seeing it stopped M and I cold when we drove past (and sent us scrambling for our cameras.)  The friendly nature of the County was further revealed when the first car that drove past us slowed down as it passed and checked in on us to make sure we were all right. We waved our cameras and thanked them for checking with a smile. 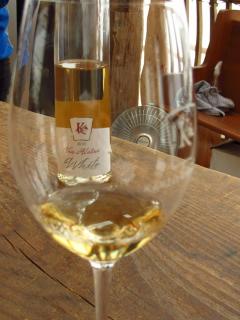 Across the field was a wonderfully photogenic red barn. The County at this time of year dances a beautiful line between desolate and stunning that feels ineffably Canadian. (At least, it brings to mind all the CanLit I read in Uni that never really made sense until I moved East. That said, one day, I’ll reconcile the fact that to Ontarians, Ontario is not East, it’s Central, but I’ve enough prairie girl in me still to call it East.)

At right is one of the things that lured me to Prince Edward County in the first place – a Canadian take on port, both white and red, under Karlo Estates‘ Van Alstine label.  It was the last sample I tried in an array of delicious options. We started with an impressive Riesling (Lake on the Mountain) that was my trip favorite Riesling, then their Chardonnay CHOA, Cabernet Franc, and Quintus red blend (one of M’s standouts, it weaves together Cabernet Franc, Cabernet Sauvignon, Petit Verdot, Malbec, and Merlot.)

Though the Chardonnay CHOA was a little too bold for my palate at present, it had a complex blend of notes that will have me coming back on my next trip to see if my thoughts have changed. (CHOA stands for Cherry, Hickory, Oak, and Ash, the combination of County wood that goes into the barrels where this Chardonnay is aged, put together specially for Karlo at one of two cooperages in Canada, at the Carriage House Cooperage in Bloomfield.)  Compared to other varietals like the Riesling and Frontenac Gris Rose, it’s not as easy-drinking, but I could see it becoming something I’ll love in the future.

Wonderful as the wine was, we couldn’t drink it all the time!  On our second day, M and I found ourselves at the Tall Poppy Cafe in Wellington for lunch. We loved it, and were I gifted with Carmen Sandiego’s skill at purloining landmarks, I would leave the Golden Gate Bridge and steal the Tall Poppy instead! The people were friendly, the space was welcoming no matter one’s age (people aged six to sixty sat around us, enjoying the fresh soups, sandwiches, and in my case, awesome Mediterranean platters of couscous, grilled halloumi cheese, hummus and pita, warm artichoke dip, and lots of fresh veggies and olives!  I was starving, and still walked away with a takeaway container for later.)

It’s definitely worth the stop, if you find your feet taking you to PEC.

We rounded out our trip at Sandbanks Winery, and despite the chill in the air outside, it was easy to feel like summer was around the corner when leaning on the burnished copper countertop, enjoying the bright, abstract art that lines the tasting room walls, and learning that not all Baco Noir is created equally. M and I had a terrible experience with Baco Noir, once, but were slowly testing our luck with the varietal over the course of this trip. Sandbanks trumpet their Baco Noir VQA as their signature wine, so we suspected we would be in good hands.

After trying and enjoying both the regular and reserve releases, we decided to purchase a bottle of the reserve release – but not before I was ensnared by Love, Sandbanks’ cassis aperitif, a blend of Canadian cassis liquor and white wine.

It was a perfectly sweet finish to a trip to vineyards that weren’t afraid to see life through rose-coloured glasses – nearly every vineyard we visited prominently featured a rose wine or another offering in blushing hues, like Love. 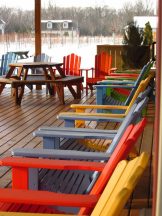 One trip is never enough – there’s a cooperage and distillery that have piqued my interest (but whom were closed on Sundays, at least in the early-March shoulder season when we visited!) not to mention twenty more wineries to wander through!

Some of the wineries are seasonal, closing until April’s festivals begin and more visitors turn their eyes to camping and wine touring in the area, so I know we’ll be back, perhaps spending some time (and enjoying some wine) in the brightly-coloured Muskoka chairs on Sandbanks’ patio.

‘Til then, happy wandering! Have you discovered any knockout wines or wineries recently?