Skip to content
I’m rarely the type of person who finds the most direct route from point A to point B.

This can drive M (with his logical, plan-based thought processes) for loops, particularly when we’re zooming down the highway, intent on some eventual goal, and I exclaim in the general direction of a roadside flyer or an ever-helpful blue attractions-at-this-exit signs and insist on a detour.

Fortunately for both of us, most of the detours end well! One of our most recent triumphs happened as we were heading back to KW from Algonquin Provincial Park (which, for the record, actually knows what a proper winter should look like – snow, glorious snow!)

We were approaching Bracebridge, and though I didn’t get much of a solid first look at the exit sign, I did catch the words “Chocolate House” and “Brewery.”

“Are we stopping?” M asked.

“Chocolate and beer in the same place, and you’re asking me this?” I replied with a smile. 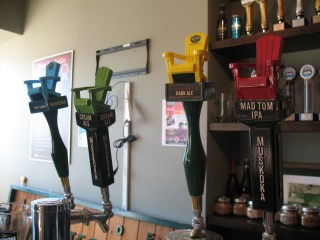 Five minutes later, we arrived at the Muskoka Brewery. Heartened by the sandwich board by the door and its promise of a free beer tasting – we’d struck out earlier that day in our attempt to visit another brewing company and were hoping to try something new – we wandered in and were greeted cheerfully, both by the representative and her golden lab cross, Gertie.

Muskoka Brewery’s tasting room is bright, comfortable and welcoming, with lots of nods to its cottage country surroundings – not least these chair taps!

Don’t be fooled by the tongue-in-cheek humour into thinking they’re lightweights; these brewers know what they’re doing. The rack behind the taps had no small number of awards gracing its upper shelves; on the lower shelves were glass jars of the various hops and malts used in the brewing process.

I’ve got a lot to learn, and enjoyed the time that the Muskoka beer expert (sommelier?) took with us, going over a little bit of the history behind some of the brews and showing us individual flower clusters of one of the hops. 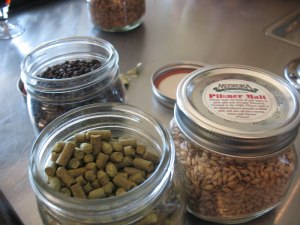 Hops – or, at least this species – was prettier, softer than I’d expected, a thing of light green petals and a mildly sweet smell. It seemed more like something that would be added to a herbal tea, not a full-bodied beer. In the picture to the right, the hops are in pellet form in the middle jar; the petals themselves can be seen just behind the jars.

(The other two jars hold the malts for the Dark Ale and Craft Pilsner, respectively.)

But while ingredients, ambience, and awards are wonderful things, how did the beer itself fare?

Quite well! We had the chance to try their full range of beers, and the seasonal feature – a “Winter Beard” double-chocolate cranberry stout. M and I had tried the stout earlier this year, but we certainly weren’t complaining about a second opportunity. The cranberry flavour is definitely discernible, and the chocolate (very strong cocoa flavours upon first sip) lends the stout a depth that suited these cooler months. It would be a great beer to curl up with. 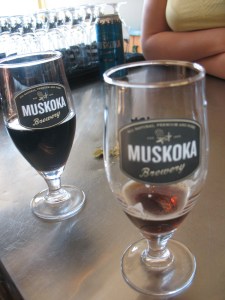 The other standout – new to us – was their Mad Tom IPA. It’s strong stuff; denser, somehow, than their other offerings (even the stout; yes, my brain is still figuring that one out.) There’s a distinct lemon-citrus note to it and a richness we both found compelling.

I also enjoyed their Dark Ale, but with snowshoes, ski poles, and skates already filling the trunk, we made a mental note to come back after a future trip!

That said, if you’re in the Muskoka area, look the Brewery up! We never had a chance to tour, as it was Family Day when we visited, but something tells me it would be fun. The staff is friendly, knowledgeable, and welcoming, the space itself interesting and with lots of little details to investigate – not to mention, the beer sampling is complimentary.

Did I mention that you might just run into the friendliest golden lab who will love you forever if you only play frisbee with her (yes, in the tasting room)? I know that she stole M’s heart! He strategized about puppy ownership at least until Barrie…

(Also, any recommendations for Ontario brews that have knocked your socks off lately?)