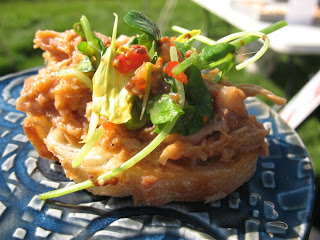 There are, I think, few better ways to welcome fall in than with a riot of fall colours, and fantastic, in-season, local food shared with an interesting mix of friends – and friends you’ve yet to meet.

And so, Foodlink‘s “Taste Local! Taste Fresh!” event was perfect for these colder days we’ve been finding ourselves in.

Taste Local! Taste Fresh! or #TLTF2011, as it’s termed around the Twittersphere, ran for most of the afternoon on Sunday, September 18 out at the Riverside Meadows Park in St. Jacobs. I had the good fortune to be working as a volunteer behind the scenes, handing out custom pottery plates (by clay diva Vicky Davis) to attendees and snapping photos (and snagging tastes) whenever I was on break.

The vegan salad rolls from Fertile Ground and Seven Shores were delicious and gorgeous – as were the local flowers that Fertile Ground brought as a backdrop. I kept wanting to snag one for my hair, but was fairly certain this wouldn’t go over well!

These two were one of twenty teams: 20 local farms and 20 culinary institutions (restaurants, catering companies, cafes, caterers…) were matched up for this event – one would provide feature ingredients and the other would make some culinary magic with them for the sampling delight of the 400+ attendees, volunteers, and participants.

It’s wonderful to see this kind of support for local restaurants and farmers; given, in sunny, summery Ontario, “eating local” has gained some traction, but it’s events like this that truly build a sense of community – if you know the farmer that grows the apples on your table (thanks to the folks at Martin’s for the Honeycrisp, that said!) it can change the way you look at your food and connect with your community, often opening doors to new friendships and new experiences along the way.

Speaking of new experiences, one of my first samples was a pulled rabbit crostini with a marigold & peashoot slaw from Puddicombe House and Top Market Rabbitry. (YUM.)I’d never tried rabbit before, and thought that Chef Lance’s preparation was delicious. I don’t think it will be a meat choice I will seek out regularly (particularly as, in my history at least, when it appears on a menu, it’s to the tune of ~$40 for an entree) but it meshed beautifully with the piquant, fresh, and wonderfully colourful slaw and ultimately was a great “taste.”

Despite a windy start, the day was gorgeous, and it was fun to people-watch as folks floated by on their own personal Cloud Nines with smoked apple gelato or pumpkin blinis in hand. I think everyone who I asked “so, any favorites yet?” had a different answer.When walking around before the event started, I had to snap a shot of the homemade pepper jelly from the amazing team at Kitchener-Waterloo’s Culinary Studio! These jars almost look like minature stained-glass windows, but their contents (a swirl of which was served, perched atop a freshly made corn donut with buttercream icing) was far more delicious. 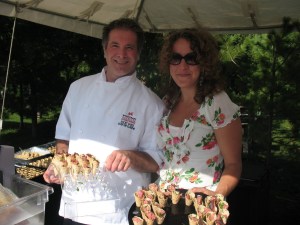 Another perk of events like these can be the bits of education one picks up along the way. In this photo, you can see the results of when Baer’s Vibrant Farms and Wildcraft teamed up to make a scrumptious sous-vide organic beef spiral served in a sesame cone with quinoa slaw.

As I snapped photos, I learned from the Wildcraft crew how the sous-vide cooking method works – it may not be the most visually attractive process, but it rendered delicious results!

All in all, it was an amazing event, and I already can’t wait for next year’s Taste Local! Taste Fresh! With luck, I’ll be one of those aproned blurs working behind the scenes as a volunteer to help make it awesome, once again.